Jatin P. Shah, M.D., holds The Elliott W. Strong Chair in Head and Neck Oncology at Memorial Sloan Kettering Cancer Center (MSKCC) in New York and is Professor of Surgery at Weill Cornell Medical College. He graduated from MS University in Baroda, India, and trained in surgical oncology and Head and Neck Surgery at MSKCC.

In addition to his superlative patient care, Dr. Shah is an international leader in the field of head and neck surgery. He has delivered over 1,600 scientific presentations worldwide, over 90 eponymous lectures, and published more than 580 peer reviewed articles and 11 medical textbooks.

He was awarded Honorary Fellowships from The Royal College of Surgeons of Edinburgh, London, Ireland and Australia, Honorary Ph.D. degrees from Belgium and Greece, Honorary D.Sc, from India, the Blokhin Gold Medal from Russia, the Janeway Medal from the American Radium Society, and the Ellis Island Medal of Honor from the USA. In recognition of his outstanding achievements, Dr. Shah has received numerous awards, including an eponymous lecture established in his name by IFHNOS , an academic symposium in his name by the American Head and Neck Society, an Annual lectureship and an Endowed Chair in his name established at MSKCC. 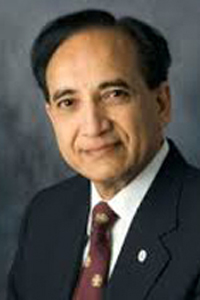